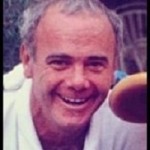 He enjoyed fishing, hunting, camping and golf but was best known for his sense of humor.

Roger is survived by his children, Denise Hood of Tacoma, WA, Alan Hood of Packwood, WA, Sarah Anderson of Seattle, WA, and Dallas Anderson of Haines, AK. Also by three grandchildren and one great-grandchild. He is also survived by his brother, Larry Anderson of Yakima and his sister, Sally Pascal of Tucson, AZ.

Roger’s children will celebrate his life individually by scattering his ashes in a place special to each of them.

Special thanks to Hospice Southwest, especially Heather and to the Drivers of One Point Pharmacy

To send flowers or a remembrance gift to the family of Roger Anderson, please visit our Tribute Store.

Preserve the memories and special thoughts shared
by friends and loved ones with a Memory Book.

A week or so earlier, I had made arrangements for respite care at a hospice facility in Longview, WA for [my loved one]. I was assured by your staff that should he expire there, your staff would transport him back to Vancouver, contact me, and follow his wishes. As it was, he expired in Vancouver. Your employees are well trained and compassionate.